A long time ago, if there was a song you wanted to listen to, you had two options: go out and buy it on vinyl (and then cassette, and then CD and maybe even Minidisk), or turn on the radio and hope that your song might get played.

In the last decade the music landscape has changed dramatically.  Any song can be found online in seconds, you can watch a video (official or not) on YouTube, and from there you can either buy it on iTunes, or stream it on services like Spotify or Apple Music – or do something less legal to obtain the song. It is fair to expect that radio would suffer given all the other choice, but the truth is that it’s doing just fine.

While many radio stations have shuttered or slimmed down their operations over the years, possibly even moving to online or DAB to save costs, it is clear that the industry is still strong, and that there is room for stations and personalities to thrive.

One of the reasons that radio is still so popular in our society is due to its readily available passive nature. We don’t need our hands or eyes to interact with the radio so we are still free to go about and do other things. Most people listen to radio in their cars on their way to and from work, though after those times of the day, the number of listeners drops off as many end up at computers or are busy during the day. Streaming services like iHeartRadio have seen this data, and they are working to make sure that once these listeners leave their cars and get wherever they are going, they stick to radio, though they may access it on a different device.

Another bonus to radio is how localised it can be, you can listen to a global, national, county or even city broadcaster filled with news and views that are relevant to the end users; traffic reports and local events are a staple on any local radio station. Figures show that local radio is often the most popular station in their area. The top 5 radio stations with the highest listening share in their area are Island FM (49.2% of all radio listening in their area is to this station), Channel 103 (36.9%), Radio Borders (34.3%), Moray Firth Radio (24.7%) and Manx Radio (24.6%).  The share of listening in a station’s broadcast area is normally the best way of monitoring how popular a radio station is. This makes it easier to work out how popular the station’s entire broadcasting output is, in comparison to others in its area. [Information from media.info] 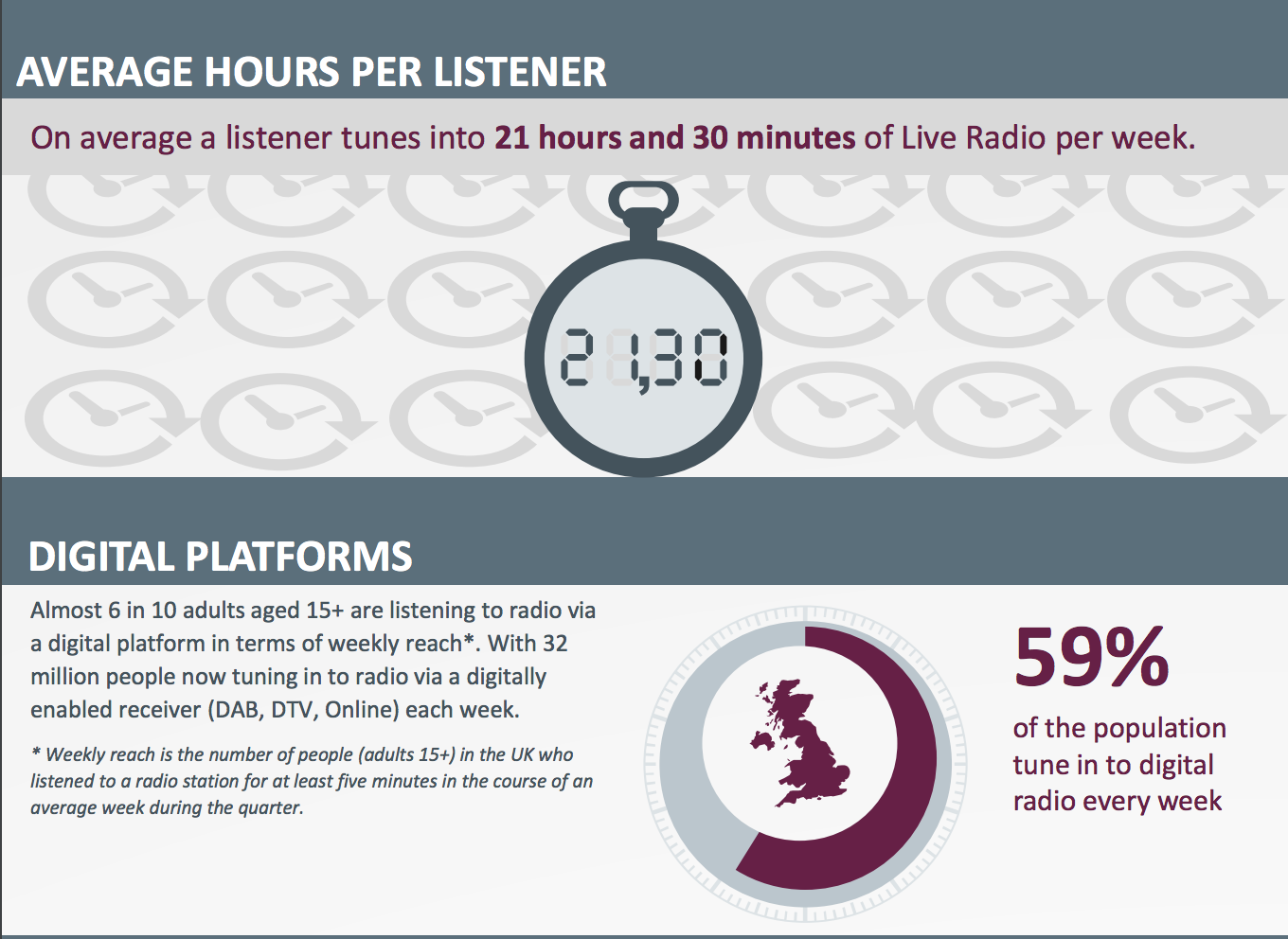 Radio is also a format that is easy to access and understand, there are still millions of people who are not online and have not yet tried a streaming service, but everybody knows how to operate a radio. There is no learning time associated with enjoying music, and it certainly doesn’t cost anything to continue to enjoy the medium (other than the Broadcasting Licence that we are required to have to listen to radio). While listening to radio certainly doesn’t offer the same freedoms as selecting a specific song from a library of tens of millions, most people are happy to identify a style that they like—pop, rock, hip-hop, 70’s—and let a curator (in this case a DJ) pick out the tunes from there.

Radio has embraced online life well and adapted accordingly (arguably better than TV) stations or personalities use social media to spread messages, competitions and get engagement form audience that in the past would only have happened via a call in or snail mail. They have learned to embrace the instant nature of social media that reflects and compliments the instant nature of radio broadcasting.

Infinite choice is nice, but judging by the fact that there are still hundreds of millions of people listening to the radio on a weekly basis, it clearly isn’t what the majority of people are looking for.